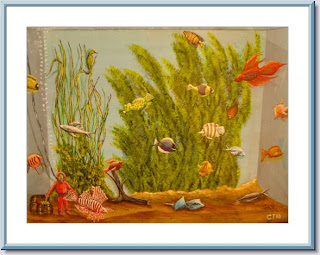 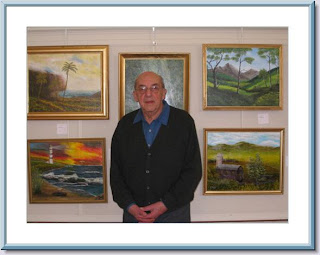 INTERVIEW WITH THE ARTIST – CHARLES THALOR
Blog written by Bob Gilbert
I had the pleasure of interviewing Charles Thalor at the opening of his one-man art show entitled “Visions” at the Gourgaud Gallery on .
The show is dazzling.  There are approximately thirty-five acrylic paintings that “Charley”, as he likes to be called, created from the end of 2009 through the present.  The subjects include landscapes, still life, two religious pieces, and a portrait of Charley’s wife, Zelda.
Here is what Charley shared about himself and his art:
Charley lived most of his life in and was always interested in art.  At age eleven, he painted a portrait of his grandmother, which revealed his talent to his parents.  In Junior High School, his art teacher recommended that Charley attend art school.  This was not to be, as his father died early and he had to help support his family.  He painted occasionally, but eventually lost touch with art due to the demands of family life.  He worked as a lithographer for thirty-seven years and retired nineteen years ago.
In mid 2009, Charley had complicated knee surgery which left him a little depressed.  His daughter came to the rescue when she took him to an art store and bought him a bundle of art supplies.   Charley had not painted for thirty-four years, but when he picked up the brush, he found that he had not lost his touch!  He reconnected with his love of painting and has completed fifty canvases since late 2009.  Each one takes approximately eight to ten hours of work.
Charley has no formal art training and prefers it that way, as he is free to learn from his own ideas and mistakes rather than being influenced by others.  He feels that his work has significantly improved of late, and he can’t help but wonder how much he could have accomplished if he had not taken a thirty-four year break!  I guess we’ll never know, but we can only appreciate the inspired works that he has provided for our current show.
Charley’s preferred medium is acrylic because he feels that it is easy to work with and does not involve the mess and odor associated with oil (for which his wife is more than thankful).  As to the inspirations for his paintings, Charley has traveled widely and draws on memories of the many places he has visited.  He does not rely on photos, as ideas generally flow from his memory and imagination.
The show includes a quirky painting of a fish tank full of tropical fish.  Gazing into it felt a little like looking into a real fish tank.  I wondered what gave Charley the idea for this unusual and interesting subject.  He recalled that he had joked with his wife about how he would like to have a fish tank but “who wants to be bothered with cleaning it, replacing the dead fish, etc”, so he decided that a painting of a fish tank would be a good substitute!  The painting is covered with glass to make it look like a real fish tank (which it did!).
There is one other painting covered with glass in this show - the portrait of Charley’s wife, Zelda.  He was so pleased with the excellent likeness he had achieved and he treasures the portrait so highly (not for sale), that he literally wanted it “under glass”.
By the way, Charley is eighty-two years of age and is looking forward to his next show, which will be held at the Monroe Township Library (NJ) in August, 2011.
But let’s focus on this show – the paintings involve varied and intriguing subject matter, are beautifully executed with vivid use of color, and are modestly priced.  Inexpensive framed prints are also available.  It was a pleasure to view these works, and I urge you - please don’t miss this show!
Posted by PaintingsbyLinda at 12:34 PM 3 comments: